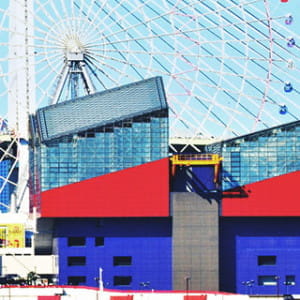 As the name suggests, Osaka's Bay Area is right on the waterfront. It encompasses Hokuko, Yumeshima, Universal City, Tempozan, and Nanko. The 2025 World Expo will be held in Yumeshima. In preparation for the event, the bay area is currently undergoing development, and there are high expectations for its future.

During the Edo period, Osaka Port was reclaimed land. In 1933, plans to develop the south port, Nanko, were underway, but halted due to the Pacific War. Later, in 1958, development restarted on the artificial islands of Yumeshima, Sakishima, and Maishima. In 1887, the beach and popular amusement park where many tourists and locals go was created.

For access to the Bay Area, you can take the Metro Chuo Line, the JR Yumesaki Line, and the Nanko Port Town Line. You can get from Osaka Station to Universal City in about 10 minutes, without having to transfer. Also, you can use the boat, Captain line, to conveniently go between Osaka Aquarium Kaiyukan〜Universal City Port.

Nearby the aquarium is a place where you can make your own original takoyaki with a variety of ingredients. We have fun activites for both kids and adults here.

Tickets are not fixed to a certain date or time; once you purchase one, you can use it when you like, within the valid period. They allow for more flexiblility in organizing your trip. If things don't go according to plan, you can easily reschedule without the hassle of contacting anyone or worrying about rigid policies. They're easy to use too! Just show the QR code.